There is one more room to share upstairs – the spare bathroom. It’s kind of small on it’s own though so I thought I’d throw our new stairway in this post too. If you are wondering about the title of this post, we named this bathroom “Delores” because my husband and I kept getting confused when referring to it or the ensuite. I suggested we name it and that’s what my husband came up with. Does that make us odd? Possibly.

Anyway, here are the before pictures: 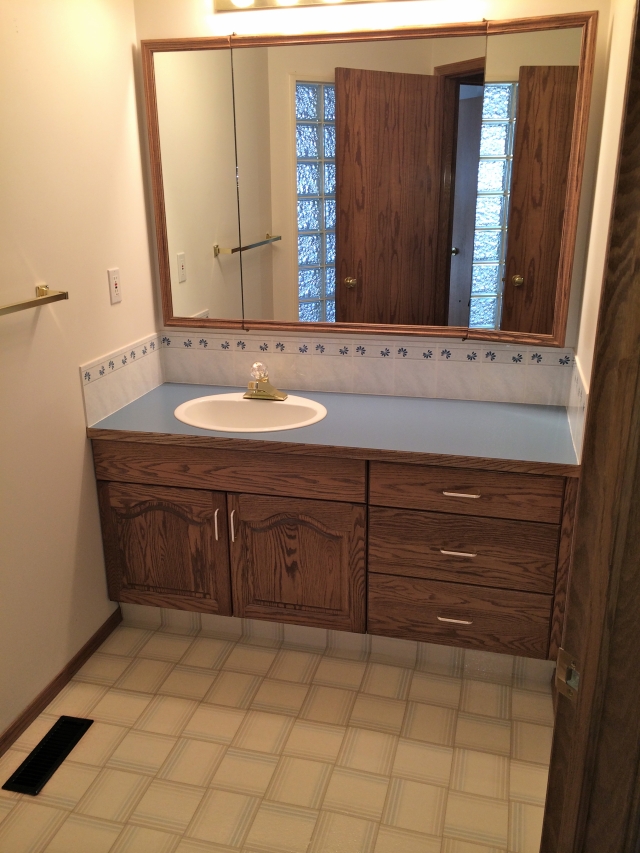 And here is what the stairs/Delores look like now: 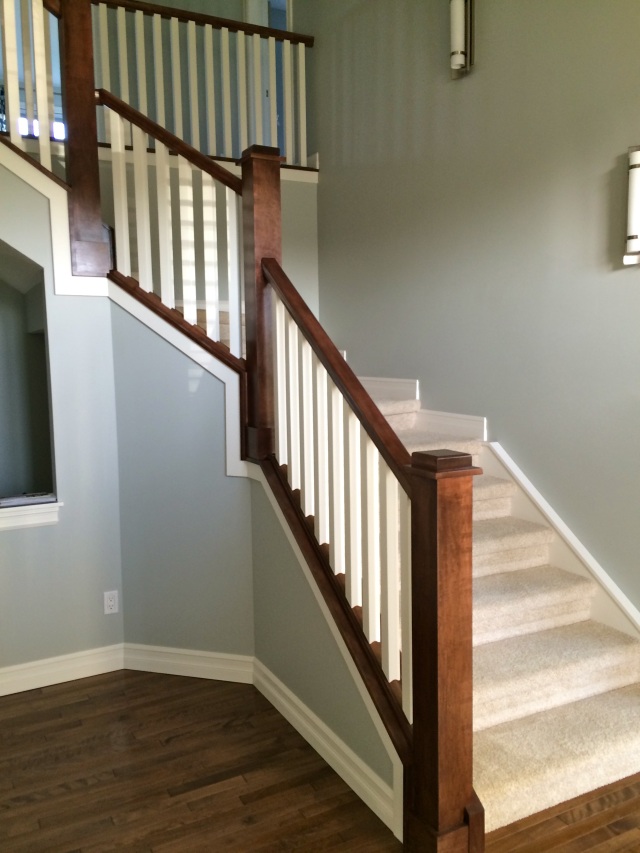 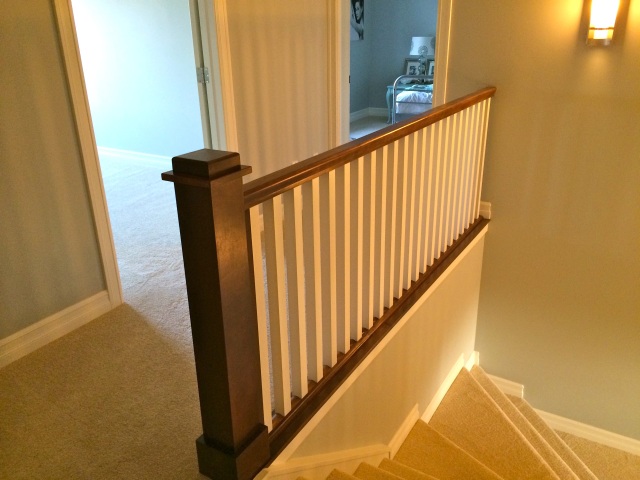 We replaced everything in Delores but the bathtub which was still in good condition: 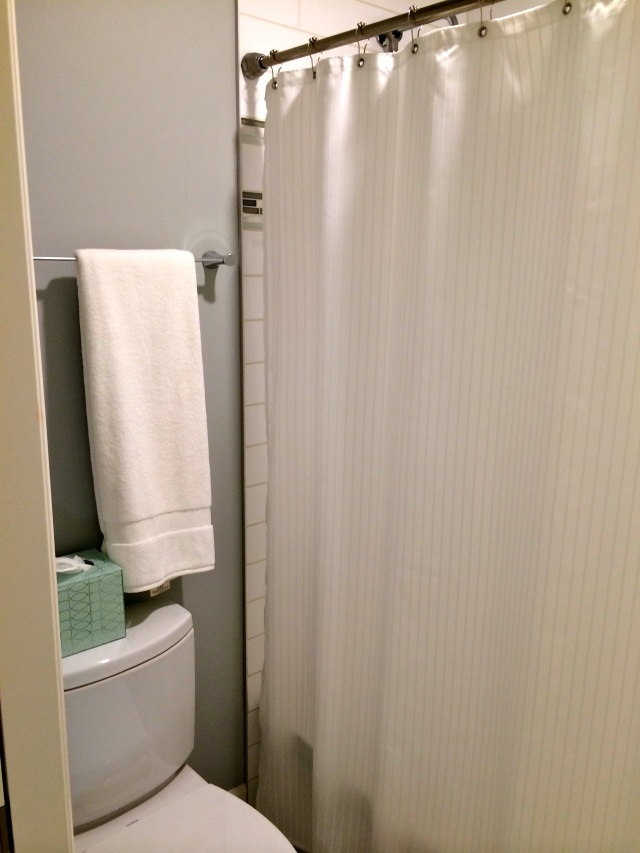 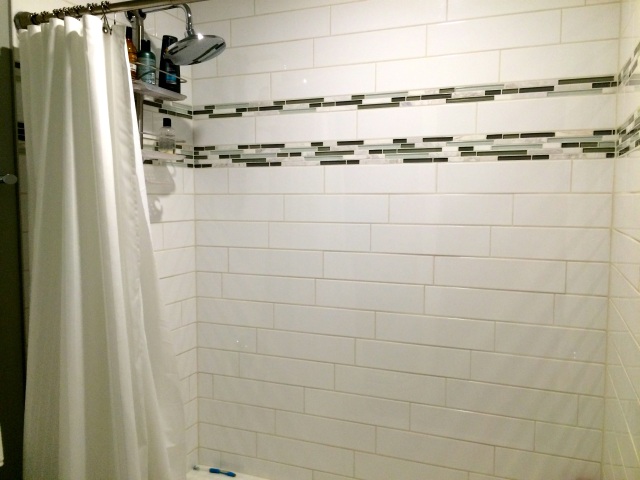 And just because I can’t resist, here is a sneak peek of the nursery theme:

We aren’t finding out the gender so I had to pick something that would work for a boy or a girl. I have lots of ambitious projects for the nursery. Hopefully, they all come to fruition before baby is born!

The master bathroom was quite the sight to behold when we bought the house – the carpeted floor was the icing on the cake! A picture says a thousand words so I will let the “before” photos speak for themselves: 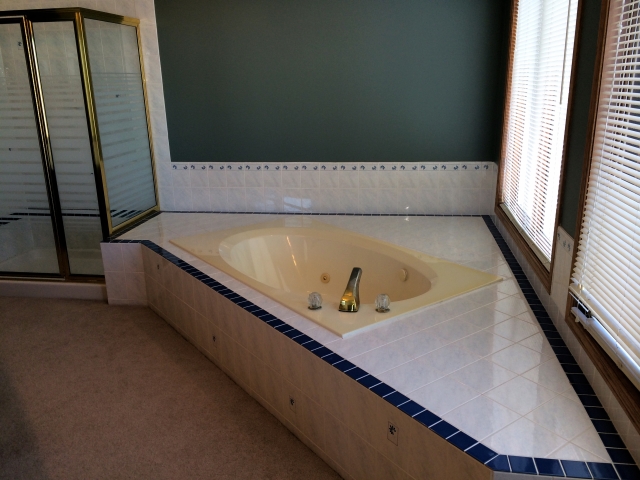 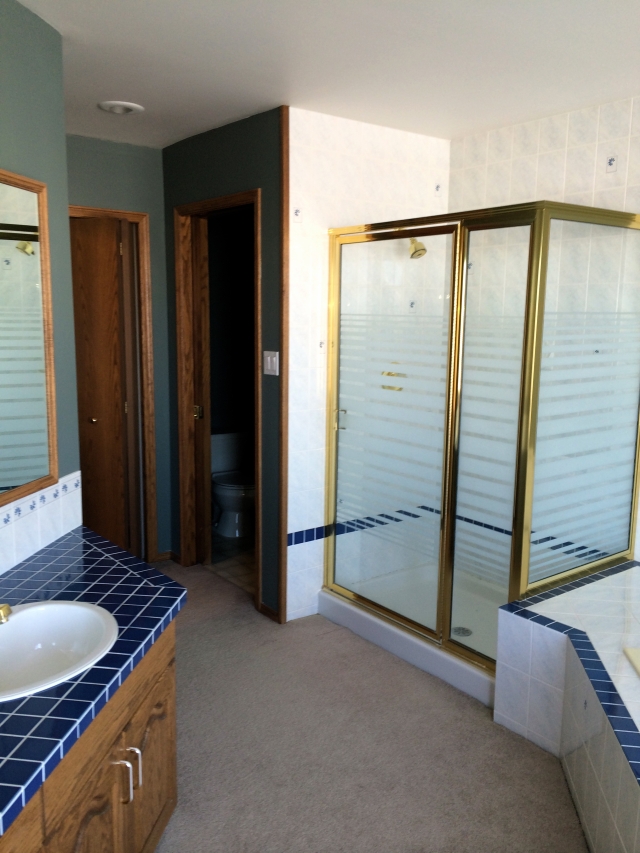 Everything (and I mean everything!) in the bathroom needed an update. It was also in need of a better layout – as you can see, the old tub took up (and wasted) a lot of space! The original layout looked like this:

We moved a few walls and stole some space from the bathroom and the bedroom to make a larger closet. The layout now looks like this: 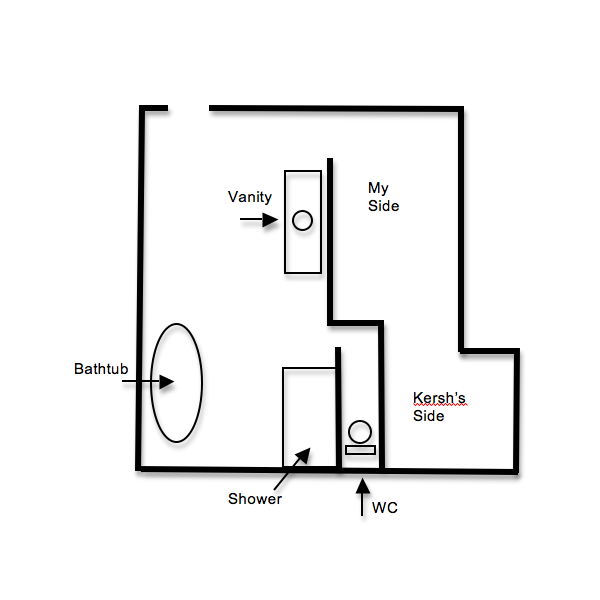 We ripped everything out and put in new tub, tile shower, toilet, vanity, hardware, and flooring. The only thing that didn’t change was the placement of the plumbing – it’s too pricey to start moving that shiz around!

I opted for a scheme that was clean and calming – white and grey. How surprising, hey? All of the tile is Carrara marble with white glass mosaic as an accent. There are two huge windows that let in a lot of natural light from the morning sun. We haven’t even had to turn the lights on in the morning yet (too bad the days are getting shorter).

Anyway, here she is in all her glory: 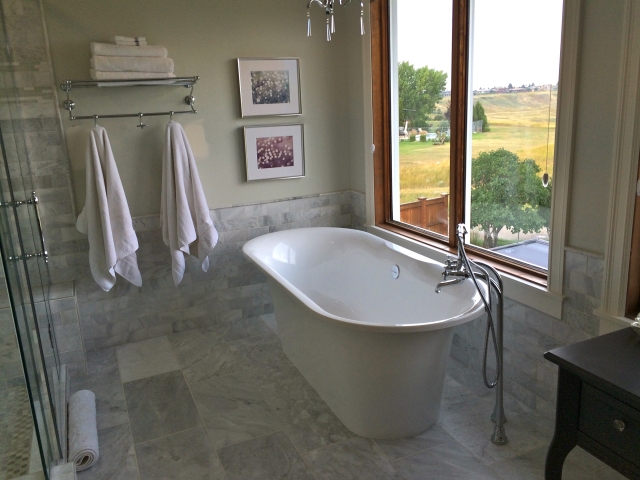 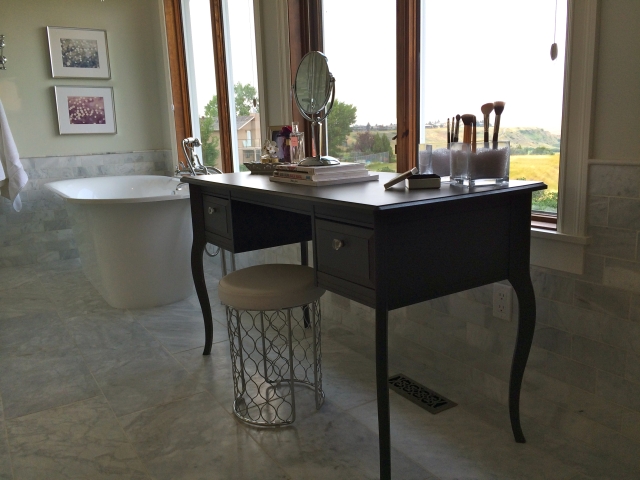 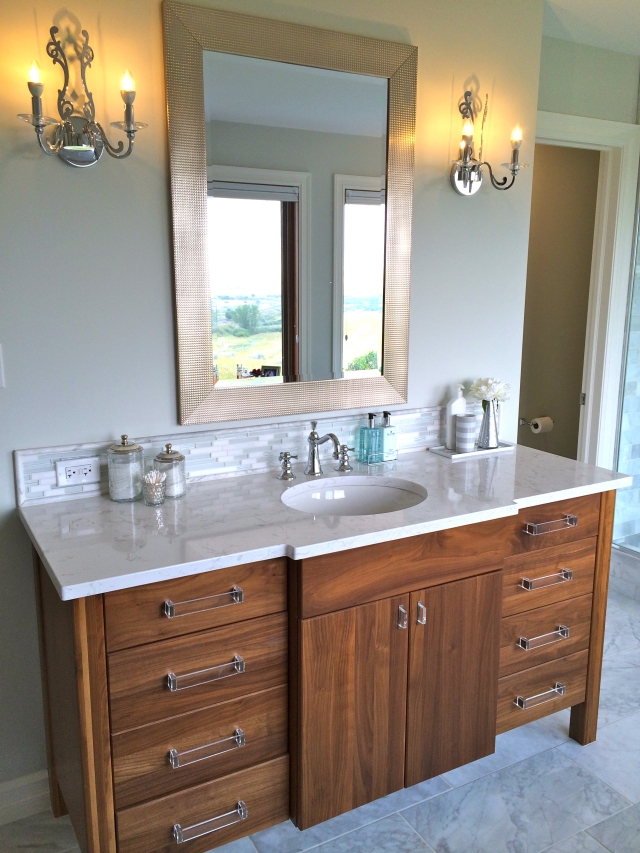 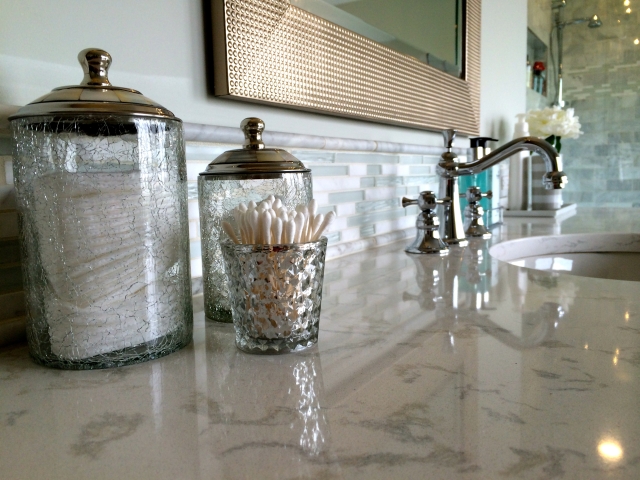 Just look at that view – I wish I could keep the blinds open to enjoy it while in the tub. Unfortunately, there is a walking path right outside our backyard and peeps be creepin’ all the time, man!

This turned out to be one of my favourite rooms in the house – I hope you guys enjoyed the dramatic before and after transformation. This post was getting too long to include the closet so I’ll do a separate post about that one next!

Thanks for reading and enjoy your long weekend!

After taking a little summer break, I am back into the swing of blogging!

As I was perusing the aisles of Michael’s a few weeks ago, I stumbled upon these cute prints that are perfect artwork for any bathroom:

I framed them using inexpensive silver frames from Target (I think the frames were $14.99 each). I chose these frames because they already came with mats – it looks like custom framing without the price and hassle.

I hung them side by side in the basement bathroom which is mainly used by overnight guests: 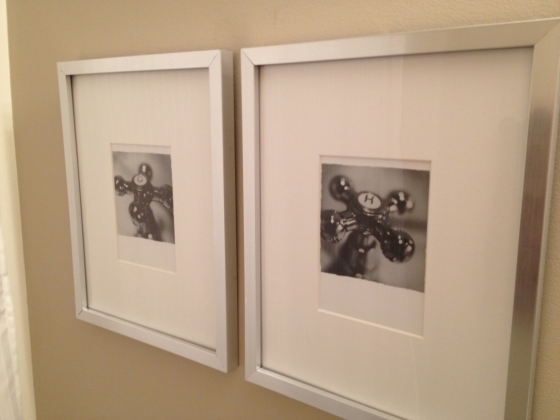 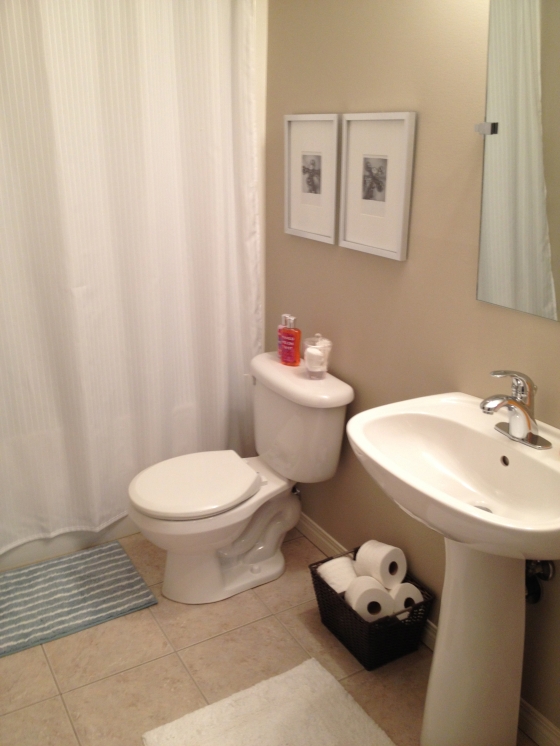 My philosophy on art is that it doesn’t have to be expensive or original to have a high impact in your home. Of course, if collecting art is a passion or hobby, fill your boots. For the majority who can’t (or don’t want to) afford the high price tag that comes with collecting unique and original pieces of art, get creative! All sorts of objects and prints can be used as art as long as you find a frame to fit – I have been known to frame napkins, sparkly earrings, and calendars!

As always, thanks for reading!

Renovations can be expensive, not to mention a huge pain in the butt (just the thought of the mess they create increases my blood pressure)! That’s why I want to encourage everyone that you can still transform your living space with just a little decorating.

I (and by “I”, I mean the professional painters I hire) am on my way to re-painting every wall in my house since moving in three years ago, but some rooms are still completely untouched by any renovating.  This includes the powder room which you guys caught a glimpse of a few weeks ago. This is what it looks like stripped down to its bare bones: 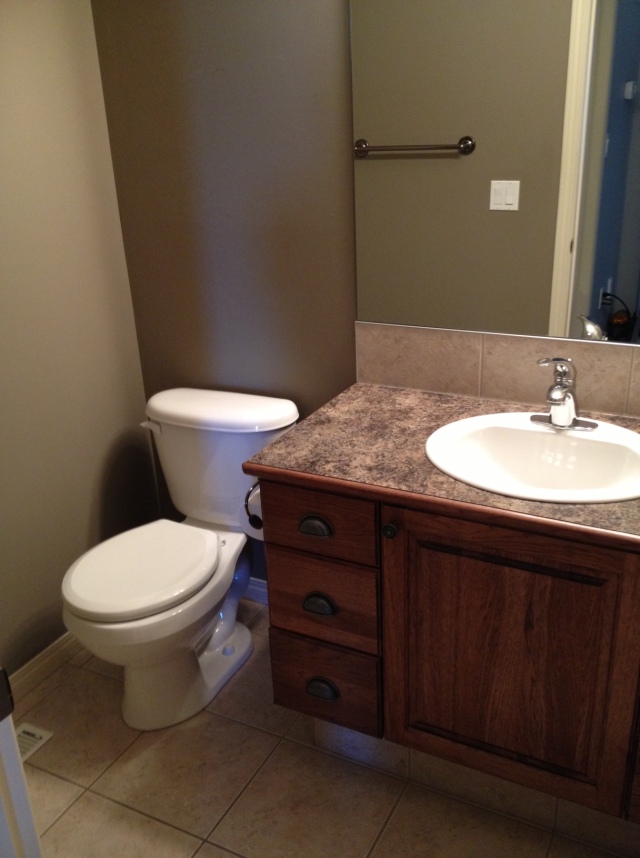 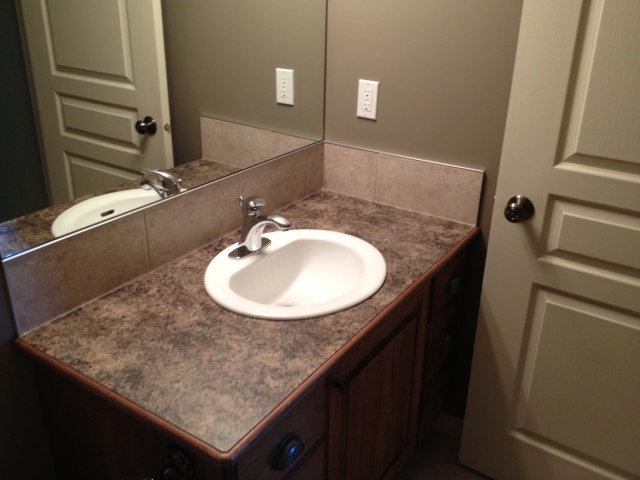 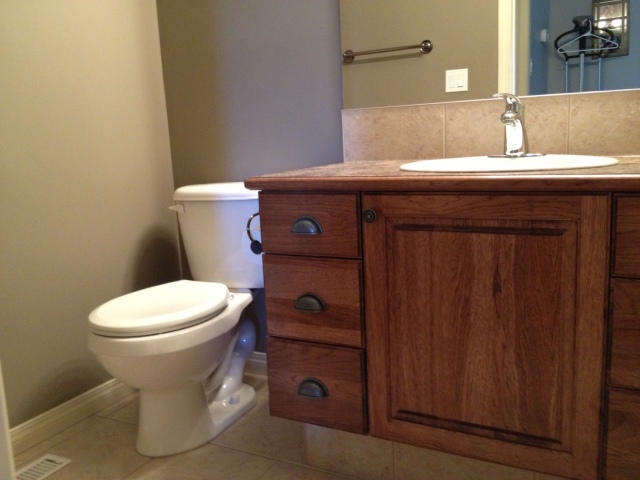 My house is only about 7 years old and this bathroom is in great condition so I don’t really want to pump a bunch of money into changing it. But, if you guys haven’t figured it out yet, the brown/beige/oak scheme is definitely not my bag. I have done my best with decorating though and I think it has made a huge difference: 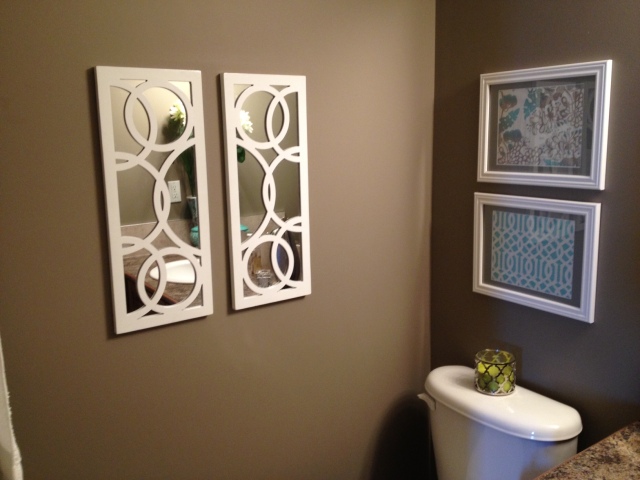 Everything in the powder room (except the candle) is either from Winners or Homesense (Canada’s equivalents to T.J. Maxx and Homegoods) and cost me less than $200 in total. Not bad, huh?

I would still like to paint this room, but haven’t picked out any colours yet. I could be really boring and go for grey which is my go to colour:

I am also tossing around the idea of a pale blue/green and chocolate brown, separated by a chair or plate rail:

Well, I don’t really have to make a decision until I finally getting around to calling a painter again. I’ll throw that on my never-ending To Do List!

Thanks for reading everyone and hope you had a great weekend!!

It’s the little things in life that bring me the most joy. Hence, why I am super pumped about some changes in my shower! I recently purchased a new shower curtain from Target. I had been wanting to replace my tatty old one for awhile. Here’s the old one: 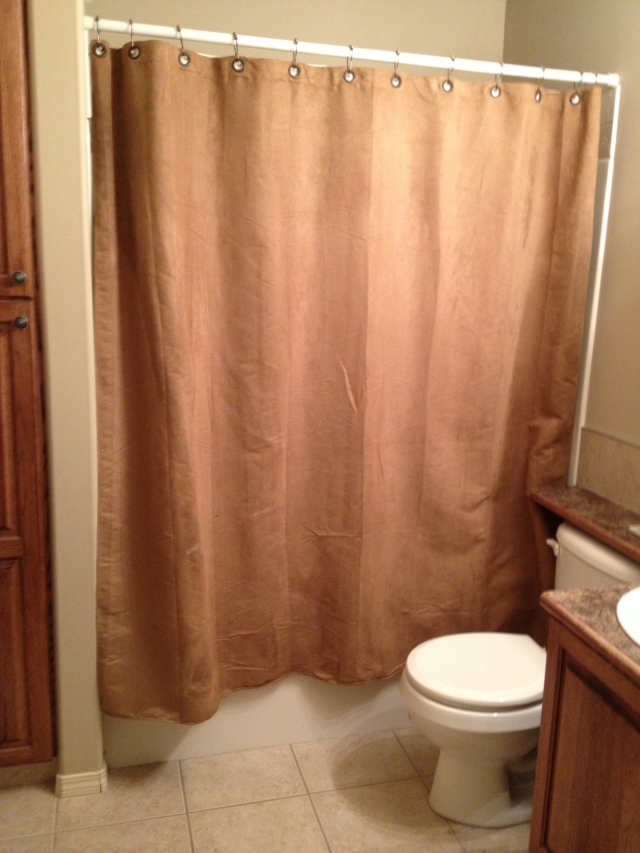 I had my eye on this one from Etsy:

My motto is you can never go wrong with ikat and chevron! Okay, I just made that up, but don’t you agree?

While I was down in Phoenix last week, I spotted a pretty darn awesome shower curtain at Target (I can’t wait for Target to get to Canada!). It’s from their new Threshold line and it was only $19.99. What’s not to love?! So I bought it and stuffed it on my carry-on for the ride home!

After purchasing the new curtain, I decided it was time for a new rod and shower rings (the ones I had have some serious rust going on). I purchased a brushed pewter rod from Canadian Tire:

And these rings from West Elm (you can purchase these almost anywhere though). These are the only kind of rings I use because they slide across the rod so nicely:

While I was at Canadian Tire today purchasing the shower rod, I spotted this Simple Human shower caddy that I’ve had my eye on for the last 4 or 5 years!  It was kind of pricey as far as shower caddies go ($39.99), but it has a bunch of cool features. Don’t take my word for it – check out this delightful little video about it!

It has now has a beautiful home in my shower and holds everything so the shower ledge is no longer cluttered with items that don’t fit. 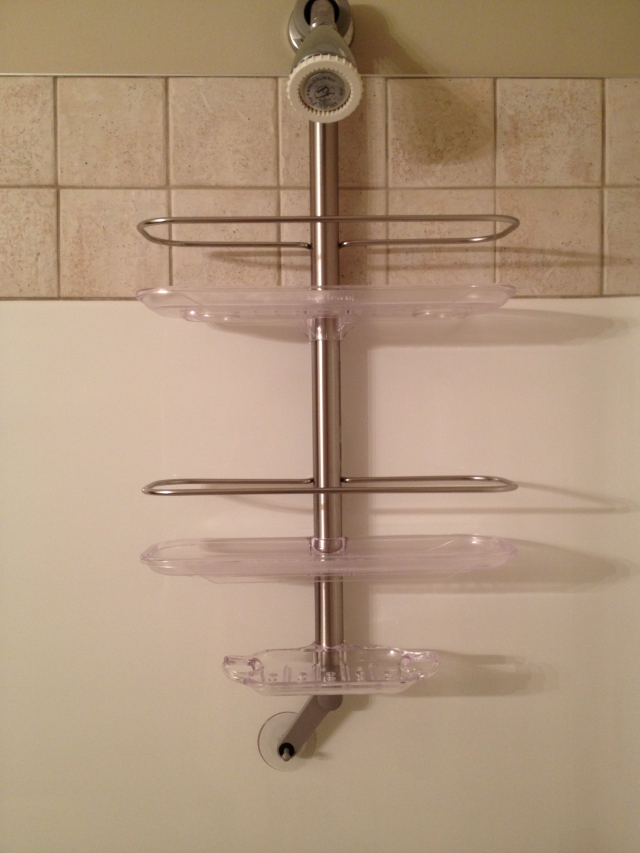 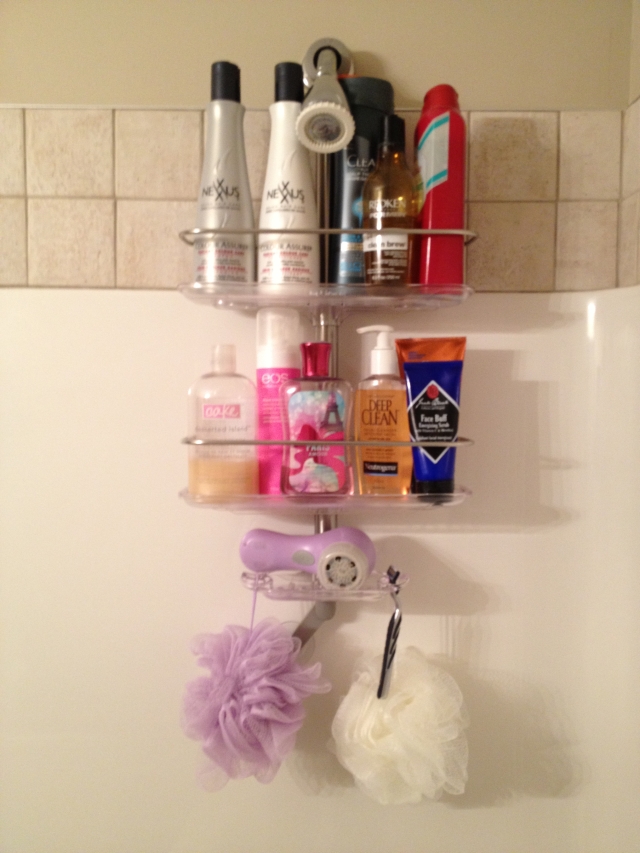 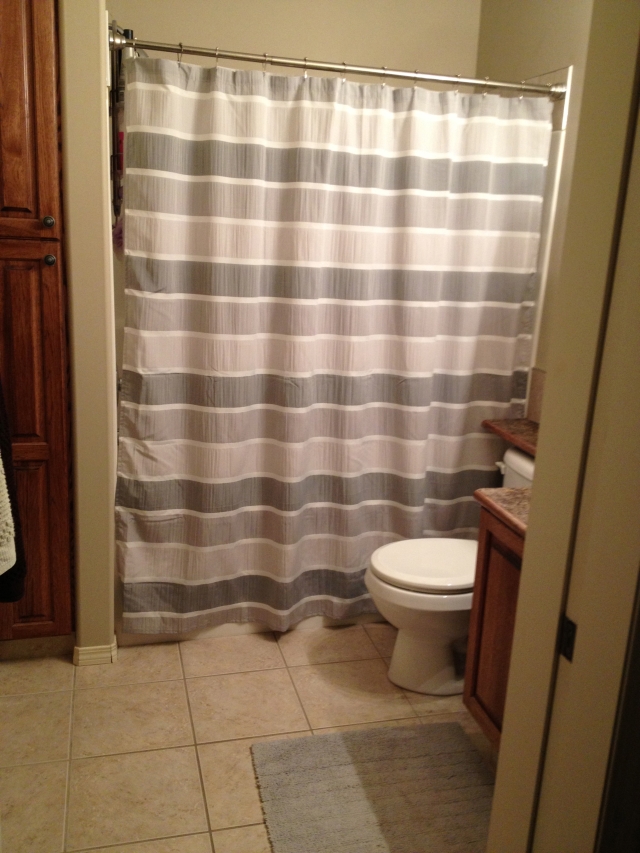 The new shower curtain matches great with the accessories I purchased from West Elm several months ago: 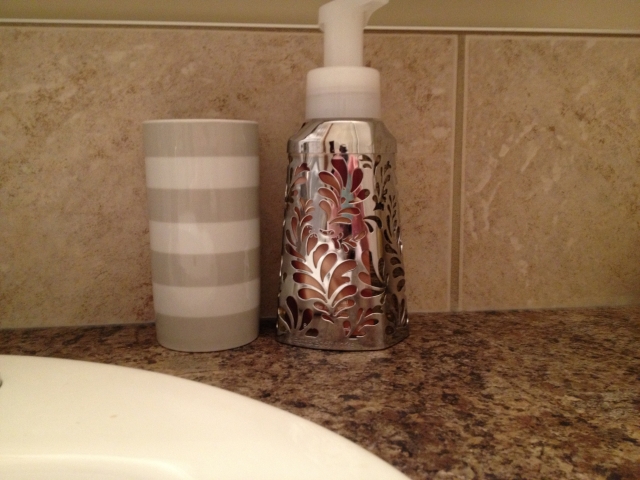 And here’s a project that will keep me out of trouble over the next few days:

Thanks for reading y’all! 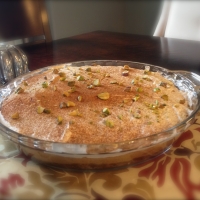